The Copper Age began in Bulgaria ca. 5200-5000 BC, and Old European copper-trade network included the Pontic-Caspian steppe societies after ca. 4600 BC.

In the Late Neolithic there was the Orlovka culture in the steppe Volga basin, the Lower Don culture to the south-west, the Samara culture in the east, and the Voronezh-Don culture between the Volga and Don sites. These four cultures were related, and some combine them into the Mariupol cultural-historical area, with similarities between their material culture suggesting a human migration ca. 5200-5150 BC to the north from the steppe Don region into the valleys of the Don, Medveditsa and Volga, reaching the Voronezh basin[Kotova 2008].

At the same time as early Khvalynsk formed to the east, in the steppe Volga basin, almost simultaneously appeared the early Sredni Stog culture in the Don-Kalmius interfluve, with the Nalchik cemetery being synchronous with its first periods. Both seem to be interconnected through a common origin from the Samara culture of the Middle Volga and the North Caspian culture, and while there are cultural differences that point to an original division, both seem to form part of a Sredni Stog-Khvalynsk cultural-historical area, with similar funerary customs and ornaments[Kotova 2008].

In the north Caspian steppe, Late Neolithic and the Caspian Sea region culture had coexisted during the Eneolithic in the mid-6th millennium, and in the Lower Volga a change is noticed ca. 5000-4800 BC among the carriers of the North Caspian culture, coincident with the beginning of a rather wet period[Vybornov et al. 2016]. The early Khvalynsk culture may have been an autochthonous culture based on the previous North Caspian culture, or its genesis could be the result of a migration of tribes from the southern region of the Trans-Caspian area[Vybornov 2016].

The Khvalynsk culture started to settle in the south of the Volga valley, reaching about 4900 BC wormwood deserts in the north-west of the Caspian area and the Mangyshlaks peninsula in the east of the Caspian area –testified by many finds of ceramics with comb decoration –, where the Khvalynsk population partly assimilated the native inhabitants. However, a part of the North Caspian culture probably migrated to the Saratov Trans-Volga region, where it was assimilated Orlovka culture[Kotova 2008]. Both events may account for the introduction of CHG ancestry in the populations of the steppe.

The formation of an Early Indo-European community, which is probably to be identified with an Indo-Uralic language, should be traced back to this period. After the adoption of a related dialects by steppe communities at the end of the 6th millennium, a rapid succession of events suggests the beginning of a clear division within the steppe.

During the 5th millennium, a strong, long-lasting, east-west oriented exchange network can be observed in the north Pontic area between the Cucuteni-Trypillian culture in the forest-steppe and Skelja (including the site at Deriivka) in the coastal steppe (Reingruber and Rassamakin 2016). These close interactions were also maintained with Sredni Stog and Khvalynsk populations, and it seems to have been driven by an interest in metal objects. In fact, the Khvalynsk centre of metalworking was formed under western influences, among which the Early Trypillian centre dominated[Kotova 2008].

The exchange systems between the north-west Pontic area and the steppe during the Eneolithic included intercommunal exchange within the ethnolinguistic groups (such as the Sredni Stog internal exchange of natural resources, like flint materials); exchange with the nearest neighbours (such as prestigious exchange between Sredni Stog and the Trypillian, Kiev-Cherkassy, Donetsk and Middle Don cultures, as well as Northern Caucasus and Crimea); and the long distance exchange, which included special expeditions, planned beforehand by men with high social status, their leaders being heads of separate villages, accompanied by symbols of power, and made far from friendly villages[Kotova 2008]. An example of the latter is the Suvorovo-Novodanilovka complex in the Balkans.

The revolution of herding, travel, and raiding – and thus the change in the steppe – had come with horseback riding, appearing ca. 4800 BC in early Khvalynsk, and spreading south- and eastward. Within the Sredni Stog territory, a new elite group appeared at the end of the 5th millennium. They came from the eastern steppe, and they were probably involved in raiding and trading with the lower Danube valley during the Trypillian B1 period, associated with the Suvorovo-Novodanilovka complex, before and during the collapse of Old Europe[Anthony 2007].

Settlements of Suvorovo-Novodanilovka chiefs have been found along the lower Danube, and sites of the posterior Cernavodă I culture (ca. 3600 BC) seem to represent the assimilation of migrants from the steppes, therefore linked to Anthony’s first expansion from the Pontic-Caspian steppes into the Balkans ca. 4200-4000 BC[Anthony 2007][Anthony 2013].

The migration of these elite horse-riding chiefs should then be associated with the expansion of a Pre-Anatolian dialect[Kortlandt 1990][Ringe 2006] from a common Middle Proto-Indo-European language[Tischler and Oettinger 1989][Lehrman 1996][Melchert 1998] spoken by the Khvalynsk population. Their temporal domination (or mere presence, testified by solitary kurgans outside of the main area of concentration of settlements) over territories of the Sredni Stog population, of a related Uralic language (from a common Indo-Uralic family), may have left common traits in both[Kloekhorst 2008].

Three samples dated ca. 5150 BC are found in early Khvalynsk, one of R1b1a-L754 (probably M269), one of R1a1-M459, and one of Q1a-F903 lineage, which points to a time preceding or coinciding with the successful expansion of R1b1a1a2-M269 lineages. While the R1b1a-L754 sample was reported as from a high-status burial, similar to high-status individuals buried under kurgans in later Yamna graves, and therefore founder of an elite group of patrilineally-related families, the R1a1-M459 individual shows scarce decoration and his lineage is not found in later high-status Yamna graves[Mathieson et al. 2015 Supplementary materials].

Samples from Late Sredni Stog include one of haplogroup R1a1a1-M417, from Alexandria, dated ca. 4200 BC, and one of R1b1a-L754 (xP297, xM269), from Dereivka, dated ca. 3966 BC. Both cluster closer than previous Mesolithic samples to Balkan samples and ANE ancestry (and thus to eastern steppe samples), and there is an important contribution of steppe-related ancestry (defined by posterior samples from east Yamna) in both, especially in the R1a1a1-M417 individual[Mathieson et al. 2017]. The so-called ‘Yamna’ or steppe component is found thus increased in Sredni Stog compared to early Khvalynsk samples (a thousand years older), which points to a gradual distribution of the component in the steppe from contacts among cultures of the steppe and the Caucasus.

A later sample from Dereivka clusters closely with Mesolithic samples, and a sample from a neighbouring region attributed to the Dnieper-Donets culture, dated to a similar time (ca. 4380 BC), belongs to haplogroup R1a-M420[Jones et al. 2017], all of which points to a period of lineage diversity before an expansion of haplogroup R1a1a1-M417, and to the strong connection between the North Pontic steppe and the Baltic.

Steppe ancestry is also found in an individual from Varna I (ca. 4630 BC) – which clearly shows CHG component – and in samples from Smyadovo, in contrast with the resurgence of WHG ancestry in central Europe and Iberia. Also, two individuals of haplogroups R-M207 and R1b1a-L754 (dated ca. 4500 BC) are found in Smyadovo, and one of haplogroup R1-M173 (dated ca. 4460 BC) in Varna I cemetery[Mathieson et al. 2017].

These samples are not proven to correspond to R1b1a1a2-M269 lineages, and dates are slightly earlier for the mass migration proposed by Anthony[Anthony 2007]. Nevertheless, the region shows a discontinuity in R1b1a1a-P297 lineages in the Balkans after the arrival of Middle East Neolithic farmers (of G2-P15 lineages), which represent around half of more than 30 Y-DNA samples in the period from 6000 BC to 4500 BC[Mathieson et al. 2017]. The fact that haplogroup R-M207 is not found in later Balkan samples either (until the second Yamna expansion) is also significant, potentially pointing to a transitory presence of this haplogroup from the steppe. Also, steppe imports are already found in Gumelnița, in the Lower Danube region, from about 4400 BC[Reingruber and Rassamakin 2016].

The older origin of haplogroup R1b1a1a2-M269 (ca. 11300 BC) compared to a later TMRCA (ca. 4300 BC) for the subclades survived in the modern population, coinciding with the successful spread of basal R1b1a1a2a-L23* (formed ca. 4300 BC, TMRCA ca. 4200 BC), point to an expansion that occurred around this time period. This population expansion came probably from some eastern clans of Pontic-Caspian herders that shaped the Sredni Stog culture in the west, and turned into Suvorovo-Novodanilovka chiefs and south-eastern European settlers.

Both lineages are found in the Balkans, Central Europe, and Armenia[Myres et al. 2011][Herrera et al. 2012], and their expansion is therefore to be associated with the original expansion of Anatolian speakers. 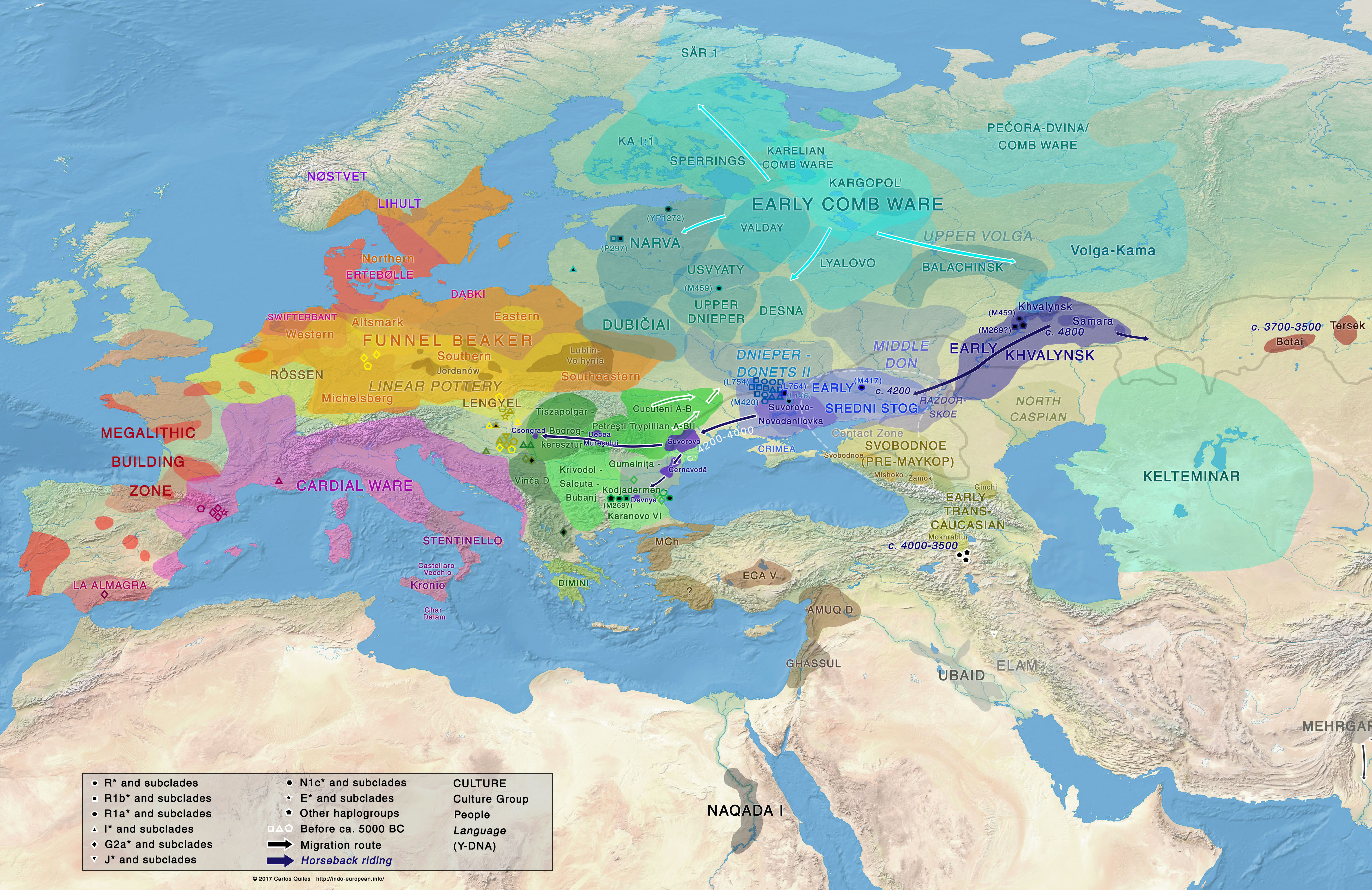